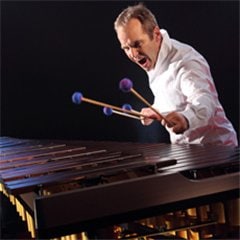 Nebojsa Zivkovic is recognized as one of the world's top marimba and percussion soloists and as one of the most unique and expressive artists in the field today. He tours Europe extensively, performs in Japan, Taiwan, Korea, Russia, Latin America, Mexico, and annually in the USA. As a soloist, Zivkovic has performed with many orchestras around the globe: Stuttgart Philharmonic, Munich Symphonic, Bochum Philharmonic, Austrian Chamber Symphony, Hannover Radio Symphony, National Orchestra of Costa Rica, Minnesota Orchestra and many others. In addition to his full time composition and concert activities, Nebojsa gives master classes and seminars in Europe, Asia, Latin America and USA. It is said that one piece composed by him is performed everyday in over 50 countries. His orchestral and chamber works for marimba and percussion have known as standard repertoires in the world. Nebojsa has got numerous TV appearances and radio recordings in various countries including Europe. He released six albums for marimba and percussion music composing most of pieces as the result of his outstanding creativity. Nebojsa performs on Yamaha Marimba YM-6100A & YM-5100A.

Nebojsa Zivkovic began to play the Yamaha marimbas in 1988. At that time in Europe there were only very few opportunities for marimba artists to perform with the instruments. Since then he has been using the musical instrument as the ""partner"" to express his own music. He customized YM-6000 in cooperation with Yamaha for the first performance of the second marimba concert composed by him in 1977. In the process to customize the instrument, Nebojsa was uncompromising not only in terms of sound but also weight and functionality. These design concepts continue to be applied to the subsequent planning and design of Yamaha concert marimbas.