Medellín, Colombia―From March 31st to September 30th, Yamaha Corporation ran the I’m a HERO Program for children in the Republic of Colombia (hereinafter, “Colombia”). In order to help children discover within themselves the strength to face invisible barriers in their lives, this program exposes children to the joy of performing music, and also to significant challenges.

After a huge effort, 26 children from the slums of Medellin, Colombia performed the Colombian national anthem in front of a huge crowd at a soccer stadium, their big stage.

Yamaha will release a documentary about their story. Through their interaction with music, these children start to find out changes within themselves. It is a story of small heroes who overcame adversity.

I’m a HERO Program - With an instrument in hand, you become a hero

Throughout the world, children face invisible barriers that limit their futures—inequality and poverty, as well as discrimination, prejudice, and other disadvantages that these problems cause.

The I’m a HERO Program encourages children to take center stage in overcoming these invisible barriers, to support them to become a hero, an icon of fighting against and overcoming adversity, through a significant challenge, to perform in a big stage.

26 children who participated in this program were from the ages of 7 to 13, most of them living in a slum area within Medellin, Colombia, where crimes happen every day.*

However, their hard work for over half a year was not easy. In the slum area, you have to face the physical challenges to get to cities and practice every day. With kindness and sometimes strict support from their families, they finally faced the big day.

Sunday, September 30th. A match of the Colombian Premier Football League. After a video showing “journey”, the names of 26 heroes were called and entered the football field with the players of Atlético Nacional football club, in front of a huge crowd.

Football is extremely popular in Colombia. Atlético Nacional, especially, is a strong Medellín-based club that has won the Colombian national league championship 16 times. Children are particularly awestruck by the players of Atlético Nacional.

After the performance, their faces were held high, looking straight forward with pride. Through interaction with music for the past six months, children felt that something has changed within themselves. They overcame the invisible barrier and became a hero.

Yamaha will continue to believe in the power of music and face social challenges in various ways through our activities.

Scenes in Medellín, Colombia where some of the kids in this program are living

A participant, Luidison Morales Borja, practicing Venova and his family supporting him

26 heroes perform the national anthem in the Atanasio Girardo studium

Some of the kids who participated in the program

By participating in the program, I learned how dangerous are the places I was hanging out. I stopped myself from going to those places and practiced Venova instead. Now I can also choose the music I want to listen to.

I like songs with messages, but without bad things. I think heroes are someone who can achieve things and fight for people. You don’t have to be a superman.

Paccho was a who you may call “a bad kid” before. But after being involved in this program, he started to concentrate on music. Music brought positive changes to Paccho. He is now a son who not only helps me with the chores but who helps out surrounding people. I think music is something that gives out chances and opportunities to change.

The children who took part in this project are truly symbolic of our city. Their aspirations will help many people. And everyone involved is creating this opportunity is also a hero. I am very grateful.

The most valuable things in Medellín are not just the scenery like the mountains and flowers but also the people and their talents. People are constantly moving forward. There is already hope in this city, and even though there is still poverty, there is constant hope of a bright future. My hope is that they become the symbol of this hope and spread their positive influence.

I was touched by the children playing the Colombian national anthem. And they are no special people. But they are definitely heroes, who can achieve something for others. I hope that they will continue to challenge new things and strive for their dreams, treasuring this experience.

I would also like to express my appreciation to all the stakeholders who were devoted to preparing such a wonderful event on the auspicious 110th year of amicable relations between Japan and Colombia.

Currently, in Latin America, where Colombia is also located, there is a movement to counter social problems such as delinquency and poverty with the power of music, and Yamaha has been supporting this movement.

In Venezuela, there is a government-backed music education project called El Sistema. Implemented as a national strategy to prevent delinquency and eradicate poverty, El Sistema aims to promote society-wide stability by engaging children in musical activities and securing future employment opportunities for them.

Yamaha supports these efforts, and for the last 15 years has contributed by promoting instrument maintenance techniques and training instrument repair technicians.

In Colombia, youth orchestras and bands were launched in Medellín (Red de Escuelas de Música de Medellín) and Bogotá (Fundación Nacional Batuta), for example. Yamaha also played a hand in the creation of a scholarship program called ToKANDO, which is run by Fundación Incolmotos Yamaha, a major partner of ours in Latin America. 26 children participated in the I’m a HERO program were mainly from ToKANDO living in the slum area.

New challenges have also appeared proceeding with these activities. There was a lack of awareness of the importance of and methods used for instrument maintenance, exacerbated by the fact that there are few people who are able to repair broken instruments. To address this problem, we launched the AMIGO Project in 2014, offering workshops to enable people to maintain instruments on their own, and promoting the training of technicians who can repair broken instruments.

*Kids played the national anthem before the kickoff

Performance of the national anthem before kickoff

*2: A multi-purpose stadium in Medellín, Colombia.

Venova™: A new wind instrument that is sturdy and easy to maintain 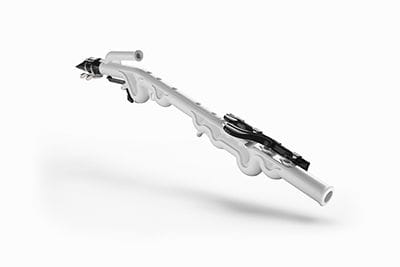 Venova was developed with the philosophy of creating more music makers. The Venova delivers a sound that is very similar to the saxophone, without the complicated structure and the multitude of parts. In contrast, the branched-pipe structure and shorter body thanks to the sinuous shape make the Venova a compact instrument with only as many keys as needed. It is made of lightweight, sturdy and washable ABS plastic, so it can be taken anywhere with ease. While the fingering is as easy to learn as that of a recorder, the Venova is a genuine reed instrument that delivers the feel of a conventional wind instrument.